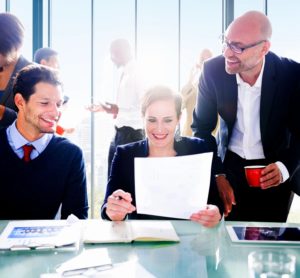 Easy Benies was formed with one simple purpose; to provide easy to implement, sustainable, employee benefit solutions to Hoosier businesses.  Small business is the heart of America and we believe they deserve the same service most agencies reserve for larger revenue clients and in fact, many need a higher level of service lacking a full HR department.  We not only provide the strategy but assist you in getting there through our full spectrum of support from ideas to implementation to administration, with the end goal of happy, healthy employees and profitable clients.

Easy Benies is the culmination of a 21+ year friendship of two industry veterans; one focused primarily on group health and the other on voluntary and enrollment solutions.  Both founders saw the industry failing to provide quality, personal benefit education and communication and the industry abandoning the small market and brought their varied expertise together to deliver the service that every day Hoosier businesses and their valued employees deserve.

Parrish is one of the two founding partners of Easy Benies LLC.  Having started in the employee benefits industry in 1999, he quickly realized his passion for educating employees on their insurance options at work.  Having seen that many employees didn't understand what their coverage was nor how to utilize it.  This has driven him to focus on closing that knowledge gap while driving overall employee appreciation of their benefits package.  Parrish is the agency's lead consultant on group health and ancillary benefits and prides himself in not only designing quality benefit offerings but also in helping design and implement processes to simplify employer administration and employee education.  Parrish works with a range of businesses but has developed substantial experience working with municipalities over the past two decades.   He has also been a leader in adopting and implementing technology but still prefers that hands on face to face touch, billing his approach as both "hi-tech and hi-touch".

Parrish is a graduate of Wabash College where he studied economics and communications along with playing football and rugby.  He met his wife Heather while working through college and they are the proud parents of two boys, Easton and Hudson.  We can't forget the four legged Peachees which include two German Shorthaired Pointers, Jasper and Tucker and a wonderful healer mutt named Chili or Chili Willy or Chili Dog.  The Peachees are avid campers and outdoorsmen.  Parrish's love of the outdoors has spurred his involvement with and donations to many conservation organizations.  His other passions include coaching his boys in youth sports, cooking, and gardening and he's known to can way too many pickles so if you're a pickle fan, you might see if he'll share a jar of his special recipe, Jolly Garlic pickles(jalapeno and garlic).

Robert is the Medicare Specialist at Easy Benies LLC. He enjoys meeting with people and

Robert attended Murray State and later graduated from Chattanooga State University. Robert is married to his wife, Deb, and together they share 4 children, Kyle, Audrey, Laney, and Lexi, as well as two grandchildren. Robert is an avid fan of college basketball, college football, and MLB and tries to watch as many games as possible in his down time. The Owen’s are counting down to being empty nesters so they can travel more, something that they enjoying doing together.

Sick of Your Current Benefits?

Join with us today to for a benefit checkup and receive a complimentary small business compliance guide.